The Joys of fatherhood

The June 21 edition of the Wall Street Journal details how dads are discovering the joys of fatherhood because– believe it or not – the pandemic.

COVID 19 has forced dads to actually be fathers. Full-time fathers. Fathers who feed their baby at night, who plop their child in a stroller and go on a six-mile run in the morning, and fathers who make breakfast, sometimes lunch, and oftentimes dinner.

Fathers are now there to play. To sing. To read. To coach. To lay on their backs in the yard with their kids and watch the clouds. And incredibly, it seems fathers are putting down their cell phones and picking up Barbie dolls. No one knows how long this will last, but I guarantee you America is busy raising the most well-adjusted, fearless kids like never before for one reason: dads are finally around. And loving it.

People in a marriage

Generally when a couple gets married, there are two people in the marriage. That sounds painfully obvious. But more and more often, in marriages today there are three people: the bride, the groom, and now the groom’s mother.

Some moms simply cannot share their sons with another woman. And some certainly cannot share him and his wife’s family over Christmas, Thanksgiving, Easter, even Groundhog day. It’s an argument waiting to happen. It takes an especially strong wife to stand up to the criticism, the offers of “help,” the nasty comments, the self-pitying, and the silent treatment of her mother-in-law to raise a mentally healthy, happy, and well-adjusted family.

But more importantly, she shouldn’t have to put up with this. So men, if this is your mother, you need to grow a pair, like now. Then phone your mom and tell her this is your last conversation with her unless she shows your wife nothing but kindness, love, and gentleness at all times. And that her next mistake will be her last mistake because you don’t need her.

You need your wife.

And they put on lipstick.
They make believe that Ken and themselves are cleaning the house, traveling to Europe, moving across the country. They are not nonplussed when a blonde Barbie suddenly becomes a black-skinned beauty. And then they are Barbie.
This is what a real man looks like today.

You have to be there to be a dad.

The world is full of fathers. What we really, really need are more dads.

Be his father, not his friend.

If you don’t understand the difference, imagine his confusion when
you try and discipline him.

It’s much, much easier to be a friend than a dad.
Dads say no, dads make rules, dads demand standards of behavior, dads do the discipline.
Dads model honor, self-respect, sacrifice, and the importance of faith.

Because kids don’t need a friend 30 years older. They need a dad.

When my son suffered the consequences of unacceptable behavior by being grounded for a summer, he looked at me dejectedly and said, “I thought you were my friend.” I gently had to tell him, “Son. I’ve never been your friend. I always will be your dad.”

Who does your child say God is?

Ask him. And be prepared to learn what kind of father you are.
If he says God is mean, and he punishes people who lie, and he drowns people, and he killed his son, and he’s afraid of going to hell, then realize who he is describing is you.
If she says God loves her and protects her and never lets her down, she is also describing you.

Never, ever, ever forget that.

Being a dad means telling your kids to deal with scrapes and bruises by:
A. Walk it off.
B. Blow on it.
C. If there’s blood, to suck it.

Things to teach your son.

Teach your son to throw up in the toilet, not on your bed.
Many boys will stagger past two bathrooms only to destroy your bedroom.
In fact at our house we had throw-up lessons. It was the only way to protect our cars and homes.

From Father to Son, Life Lessons on Raising a Boy

Remember, if you yell at a boy not to play with a wall socket, he will either stomp off or do it anyway.
A girl will cry.

From Father to Daughter, Life Lessons on Raising a Girl

Be aware that your goal is not to be the venter of her life forever.
But to work yourself out of a job.

Mother to Daughter, Life Lessons on Raising a Girl

How many miles does it take to become a better father?

It could be one.
It could be five.
Running the day away, instead of drinking it away is the best thing a dad can do after a frustrating day at work.
Yes, your kids have been waiting hours for you to come home, but they want the loving, kind, funny dad that you are, and that you will be when you’ve run the days’ frustrations away.

Moms, I’m also talking to you. Do what you have to do to be mommy dear, not mommy dearest.

Being A great parent isn’t just what you do around your kids It’s also what you do when you’re not around them.

Are you discussing this moment in history with your kids?

This is why families need to eat dinner together. Parents, it’s up to you to get your kids excited about the democratic process! We elect our leaders. And when the screaming and shouting is done, we come together as a country. So use this time to talk about the candidates, where they stand, who you like, and why. If your kids disagree, great!!! Have them tell you why. The only way your kids can appreciate their country is if they learn about it from you.

Vote. And wear your “I voted” sticker with pride

Most fifteen-year-olds have no idea of what makes our country great. And the most important difference is that we elect our leaders. This is why families need to eat dinner together. Because dinnertime is the most effective teaching time. Tell them why you stood in Iine for four hours to vote. Explain that’s the way we change things in this country. It’s important all kids know that whatever our problems, change is one election away. If they see you voting, they’ll know how important it is to you. And that’s how you raise a concerned citizen.

Is God at your dinner table?

If your family is eating a meal you bought yourself, give thanks for it. If they’re eating a meal you got from a food pantry, give thanks for it. So many kids grow up without any kind of spiritual guidance, and when problems arise, they have no one to turn to. That’s the importance of blessing each meal. Because it teaches kids that you didn’t put food on the table, God did.
Or, if you’re having financial peril, God is leading other people to put food on the table. The point is, the earlier we teach our kids about God, the earlier they begin to trust him. And that can completely change their adult life. 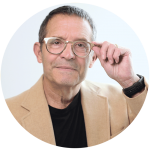